When we say 'Neapolitan cut', we inevitably come to the most famous feature of the Neapolitan jacket - soft shoulder. This atlas, which holds on its shoulders, as the Italians say sullespalle, the secret of Italian male elegance, a great lightness achieved in a difficult way, the core of the concept of sprezzatura. Being a Neapolitan specialty, Missurasu Napoli is not the only criterion determining the Neapolitan jacket. Not all Neapolitan tailors use it, and far from not all tailors, who used it, were necessarily Neapolitans.

Neapolitan jackets are often made with wider sleeves in the upper arms above the elbow, with an extended cut of the chest, with more open coat-tails, and are often shorter than English jackets that are similar to them. 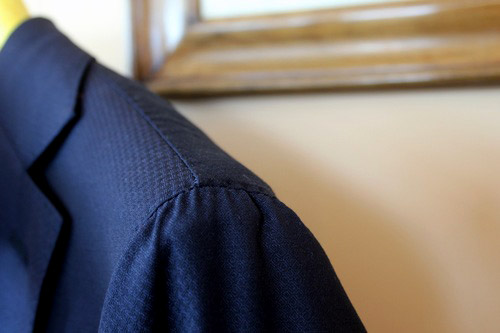 The famous soft shoulder is obtained by using minimum and sometimes completely missing padding and canvas. In this way Neapolitan tailors managed to create a garment with a natural shoulder that has soft contours, is lighter and more airy compared to the typical English jacket. The silhouette of the Neapolitan jacket has become legendary - in particular the frill in the highest part of the sleeve. It represents folds similar to pleats, where the sleeve is sewn to the shoulder. In Neapolitan overcoats the upper part of the sleeve is cut from a significantly larger piece of cloth compared with that of the armholes, and because there is more fabric in the one part than in the other the fabric of the sleeve is folded and wrinkled.

A discussion, published in the Journal 'London Lounge', explains the reason for that dramatic difference in the proportions, as follows:

'This is not made for aesthetic reasons, although lovers of style consider it beautiful anyway. For the untrained eye this cut seems slovenly, as if it were made by an unskilled tailor. This cut is simply not for everyone - but, as they say, only for people with style. Classic Neapolitan jackets (and coats) have a very narrow armhole, very narrow shoulders and relatively free cut of the torso - they are wilder than the Roman or Continental jacket, but not so much as in the tradition of tailors of Savile Row, and much narrower than those typically made in America. The wide sleeve in the upper arms, combined with the tight armhole, free falling folds on the chest, width of the back in the area of the shoulders and soft lining of the front, allow for the greatest possible freedom of movement of the arms. This jacket can be worn throughout the day, in almost all circumstances; even in hot weather you can do everything without undressing your jacket (of course within the reasonable limit of things that you can do without undressing…)'

The term which is usually used to define Neapolitan cut is spalla camicia or 'shirt type shoulder' and also manica camicia or 'shirt type sleeve ', as both terms refer to the specific method of attaching the jacket sleeve to the torso. It should be note that though the 'shirt type shoulder' is associated with the Neapolitan cut, it does not in itself define the 'Neapolitan jacket'. One of the biggest differences between traditional Neapolitan and traditional American style consists in taking in at the waist. For the traditional American style the Journal 'Put This On' writes the following: 'The American jacket has no pleats in the front part. Most continental jackets have pleats on both sides, extending from the chest down to the waist. This gives the jacket more shape in addition to the shape allowed by the side seams. The classic American jacket without darts is called a 'sack' because it looks really like a sack, without following the contour of the front part of the body.'

Another specific feature of the Neapolitan cut is the upper pocket 'Barchetta', i.e. 'a small fisherman boat'. 'Barchetta' pocket is characterized by a smooth arc, opening upwards, similar to the shape of a flat boat, and serves to pronounce the chest of the man who wears the jacket.

The 'shirt type' shoulder is related to the use of sewing techniques, commonly used in sewing a shirt, of attaching the jacket sleeve to the torso. It is not easy to fit together two pieces of fabric right on their edges; that is why a small additional length of the fabric is used, called reserve, to connect the two pieces of fabric. What happens after the two pieces of fabric are already connected? Reserves should be treated and folded inward. One possible way is each of the reserves to be pressed and folded back inward towards the same piece of fabric. This is called 'pressed and open seam' or 'open seam'.

The second way is to adjust the reserves and fold them inward towards the sleeve, which is called 'pressed and closed seam' or only 'closed seam'. 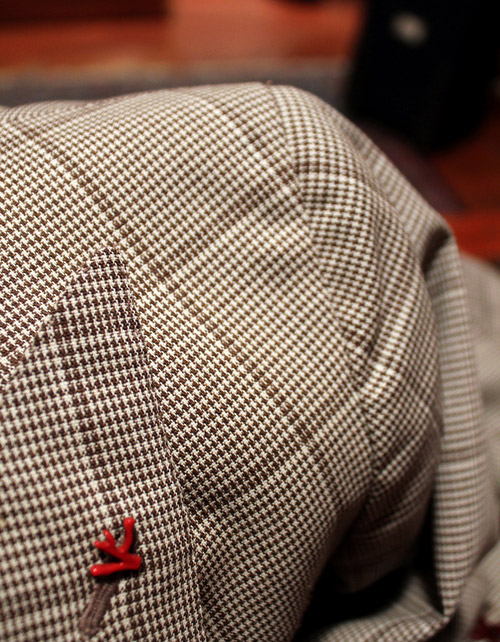 In the case of jacket with a 'shirt type sleeve' the reserves are folded and turned inward to the shoulder. This is the same technique that is used by tailors of shirts to attach the sleeves to the main part of the shirt; the 'shirt type' sleeve simply refers to applying the shirt sewing technology to jackets. By reversing reserves towards the shoulder and not towards the sleeve the jacket is left to follow the shape of the body and falls naturally.

The buttonholes of the jacket sleeves should be real and buttons should be able to unbutton. The facial seams should be hand-made and particular attention should be given to the color of threads. Plastic buttons on an expensive jacket fail the impression. On the inside of the jacket, on the internal pocket, the name of the man who has ordered the jacket can be written. The trousers should be with cuffs, slightly revealing the ankles to pronounce their fineness and the fineness of socks.

The gentleman prefers wearing perfectly polished shoes Oxford and their predecessor Botine Balmoral. At very solemn receptions he wears ballroom slippers or the most refined version of Oxford. Obsession with the maintenance of expensive shoes has reached the point that in Paris there is a community of gentlemen who meet at Ritz Hotel to polish their shoes using special shoe paints and Dom Perignon, which gives them a special shine. Others put their shoes in the moonlight to achieve a certain shade. Cognac or more light-brown shoes can be treated carefully with a darker shade of paint to acquire the mysterious depth of the color. If you apply a thin layer of red paint and then black paint on black shoes, you will obtain a specific shine. They say that Frank Sinatra polished even the soles of his shoes. You should not wear patent leather shoes during the day.

It should be noted that in terms of dress code the modern expensive design solutions have led to such a mess that you can see a tailcoat with a top hat with jeans, a hybrid tuxedo with jeans or even a black silk Scottish skirt with a jacket with welts.

Sometimes this can be charming, especially if you have the proportions of Marcus Schenkenberg, but it can make a cartoon of you … 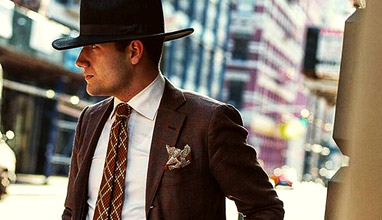