After Florence and the color explosions there, another holiday of Italian dendism, like a breeze from the Tuscan wind ... Dandy Day RADUNO DANDY ITALIANO, in its first edition, found a matching decor among the antiquities of FIERA ANTIQUARIA DI AREZZO. 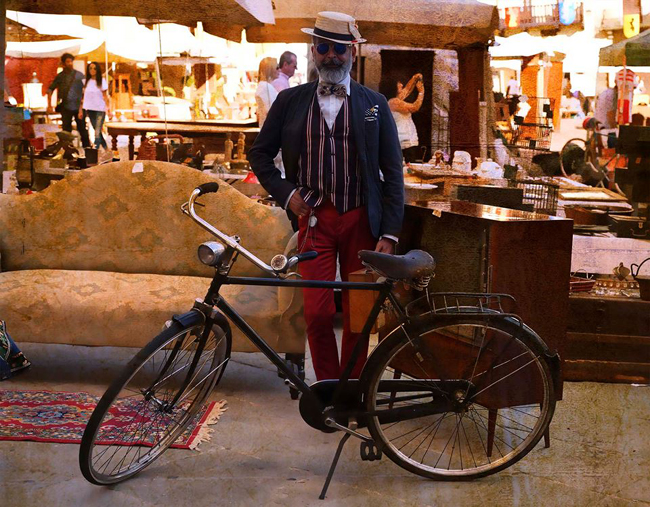 Refinery of taste, walks through Arezzo's historical center of a few dandies - masters of elegance and good manners, adorned with blessed smiles, fascination with these strides from a distant past that seemed to remind and certify some suggestions from Lezioni americane Italo Calvino: leggerezza, esattezza e visibilit?. 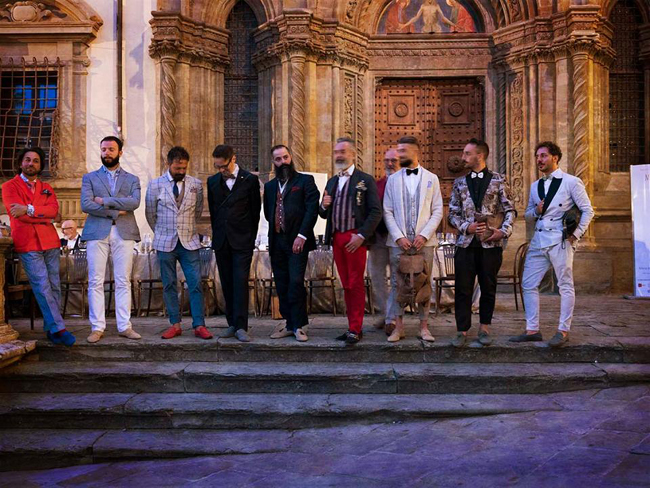 The three concepts of lightness, precision and clarity, profound and up-to-date signification that rediscovered in their elegance the main protagonists of the first "Raduno Dandy Italiano", organized by the grand ceremony Stefano Agnoloni, maestro of the style and a face of the event, and Alessio Ginestrini - an ares-co-director in Arezzo. 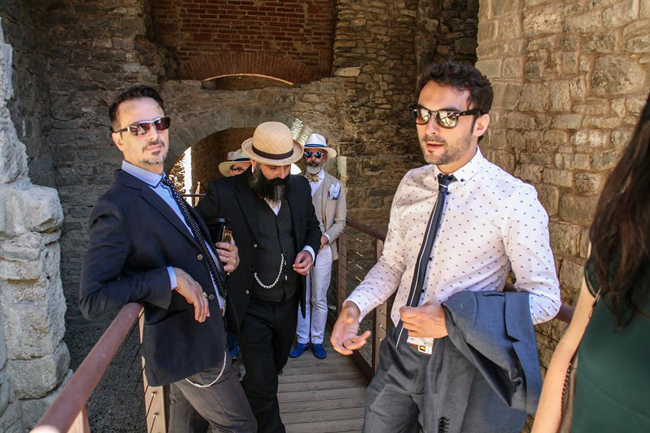 Their walks with bright and challenging garbage and grandeur, slightly antiquated poses in the medieval streets did not go unnoticed, as did their coffee breaks, or their program to look at the artwork which the city is abounded with. During the two-day stay, it gave space and a round table to reflect the grounds of dendism, moderated by Francesco Maria Rossi, writer, collector and dudes and shelter in the interior of Il Caff? dei Costanti, an immortal place chosen for photographs by the nominated for Oscar Roberto Benigni, who was shooting scenes from "La vita ? bella." 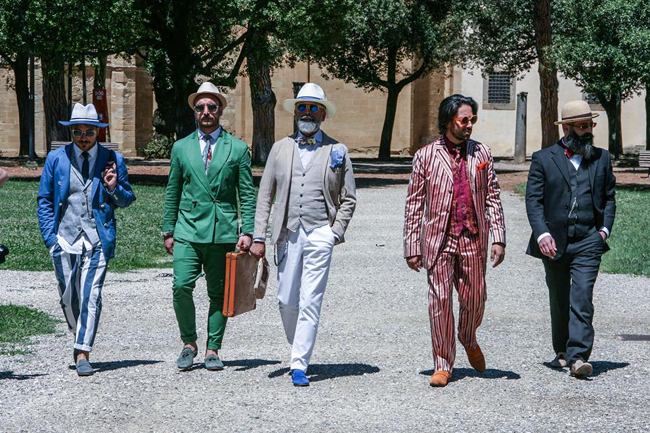 It is a good moment to emphasize the role of dendism but also to understand how they experience elegance, a sign that they have bet on. Pure aesthetics, many mistakes dendism with the Nobis but this a huge mistake, and in fact one is the opposite of the other: If the snob is a social climber and a conformist, dandies create their uniqueness with aesthetic measurements turned into sacrificio estremo pur, so as not to be conformist or sine nobility. 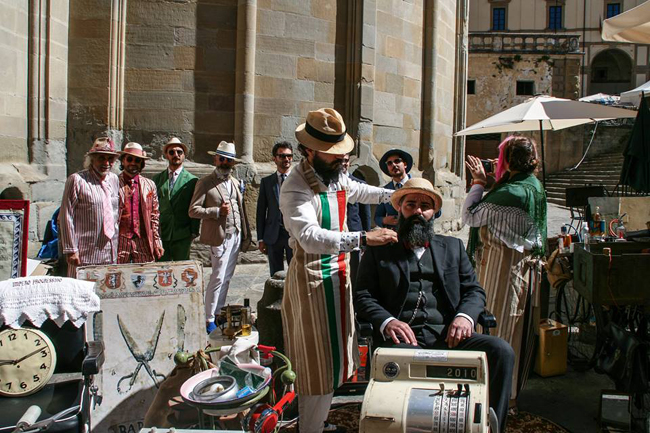 All invited people joined the conviction at the point of departure. Let's get better by staying the same. One simple motto - dendism tends to absolute absolutism.

Artemio Buzzi is so delighted to introduce the guests to his museum gallery, where you can find precious works of art fitting to the frivolity in the colors of the suits, as if they are taken from Sevre's porcelain. 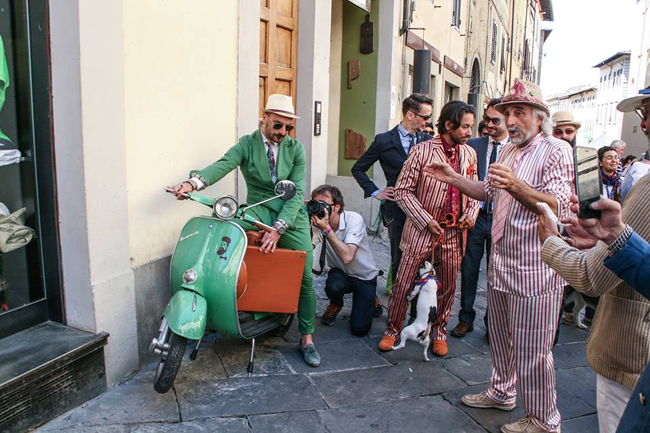 Their stay at Barberia retr? di Alessio Ginestrini Impero Progressive Hair Therapy & Barber Shop and his wife Stefania Severi are also exhilarating ... with a demonstration of barbarian care and cosmetics for gentlemen ... And the stay in barbeque for the Italian dandy is Contemporary Ritual. 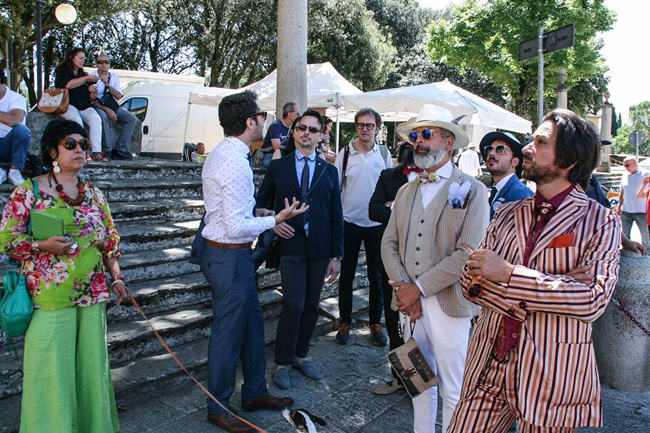 Marco Giustini is a guide of the visit to l'antica via del borgo, admiring the facade of Pieve di Santa Maria, which is built in 1200 with its 200 columns, all with different capitals ... They also visited by Fortezza Medicea Di Arezzo, where he told The history of the ancient citadel formed after the foundation of the city 1000 years ago on the remains of an ancient Etruscan city, one of the most beautiful in Italy. Thanks to his passion and knowledge, the guests are returned 2000 years back, with the stipulation that after the historical clarification they will be so kind to return to the present day. Marco quoted the correspondence between Michelangelo and Vazuri: "Giorgio, I would not have a good bit in my mind without the finesse of the air on your edge d'Arezzo." 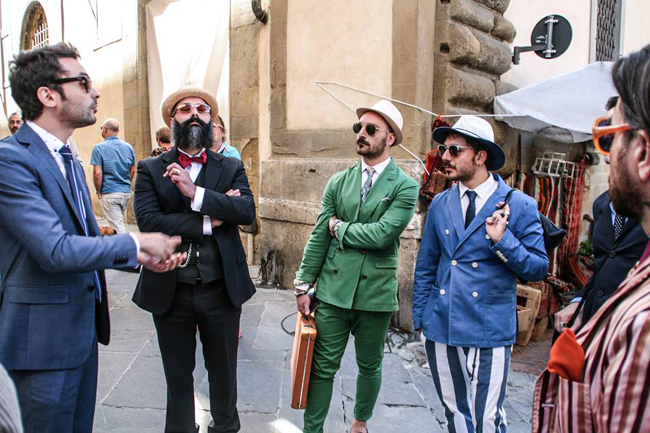 The trip was followed with a visit to the Chiesa di San Francesco in the marvelous frescoes "La Leggenda della Vera Croce" by Piero della Francesca, a world-renowned work of art history, then followed a moment of admiration for the splendid Annunciazione di Spinello Aretino e Rosone di Guillaime de Marcillat - Master of wonderful stains on glass panes.

Does not the renaissance begin from Arezzo?
Refined walks of the sworn dandies are captured by the camera of Maurizio Sbragi, and there are added a few narcissistic portraits of Darian. Afternoon, they returned at Barberia retr? di Alessio Ginestrini Impero Progressivo Hair Therapy & Barber Shop, the group visited the Museum of Palazzo della Fraternita dei Laici, where they had time to wonder in front of the mechanism of astrological clock, one of 1500's most unique ones. They were sitting on the panoramic terrace of the thirteenth century palazzo on Etruscan Minerva, with impeccable manners guided in these treasures of the castle by the lovely Laura. 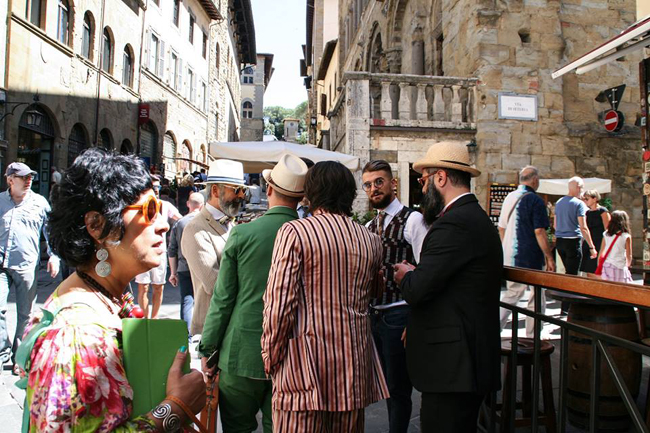 Before going for a drink, the group went to an exclusive dinner on the terrace of the Palazzo della Fraternit? dei Laici, organized in the Logge Vasari restaurant, where they tasted super foods, having the opportunity to enjoy the brilliance of the lanterns again. After that, the group went to the oldest point of the city Fortezza Medicea Di Arezzo, one of the places in the world where you can enjoy the two thousand history. Next year again… 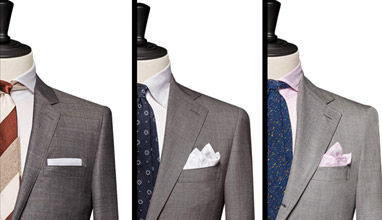