Who were the most stylish men at Pitti Uomo 90? Well, it's difficult to say, but in any case not those who like under a command put on similar hats, went unshaven line Carabas Barabas, wore their shoes barefoot and were equipped with huge hand bags. The usual suspects were there, changing five plies of suits in the colors of children's painting kit and didn't stop posing like Khanums in the sultan's harem.

Karl Lagerfeld appeared sensationally to open a retrospective exhibition and to receive the high award of Florence, Fiorino d'Oro. The exhibition KARL LAGERFELD_Visions of Fashion at the at the Palazzo Pitti, Florence, included more than 200 photos, following his career as a photographer. Some of the pictures were shown for the first time. The exposition covers the whole period since 1987 until now and demonstrates different photographic techniques, to which he was led by his curiosity in this art. 'Photography has become an integral part of my life. It closed the circle of my artistic and professional searches. Now I look at life through the lens. So I can look critically to my work and this helps me more than I could've imagine', shared Lagerfeld.

Karl was dressed in a black suit jacket, typical for his style, the usual turtleneck in the manner of Count Pückler-Muskau and a black cravat with a brooch. He was wearing fingerless silver gloves, which he didn't deign to take off even when shaking hands with the Burgomaster of Florence. 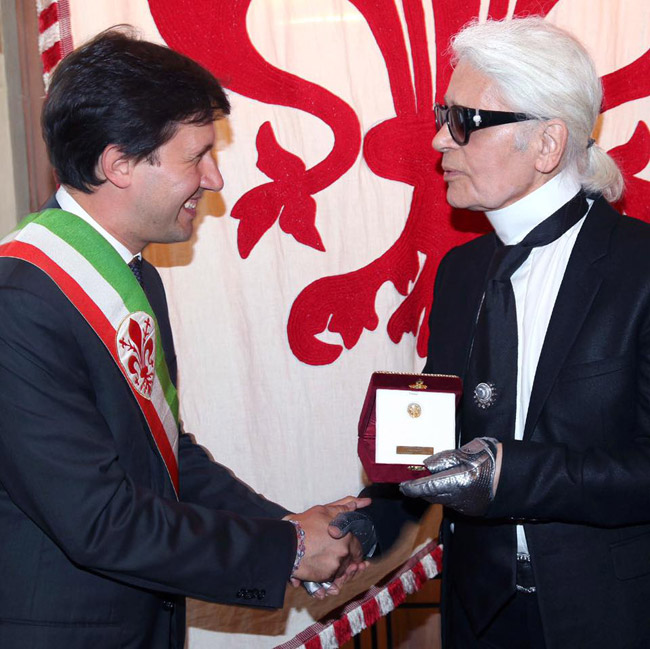 Another hit during Pitti Uomo 90 was the special guest appearance of the Russian wunderkind and fashion varmint, designer Gosha Rubchinskiy. He is developed exclusively under the aegis of Adrian Joffe and Rei Kawakubo of Comme des Garçons and tends to dress his weird looking unprofessional models in some strange USSR mix. Gosha is considered a big star in his country.

'Live now' by Raf Simons was another accent at Pitti Uomo 90.

That's my favorite fashion fair, but it has the surprising ability to show that the parrot imitation in men's fashion is sadly far from true elegance. You won't deny this, will you?