A new concept of formal wear is the leitmotif of the SS 2017 collection, where elements of sportswear intersect with the classics and are interpreted in fabrics that are only apparently traditional but actually light, bi-stretch and no-iron.
The result is the Eleventy Style expressing an elegance that is never preset for a practical, young and contemporary man. 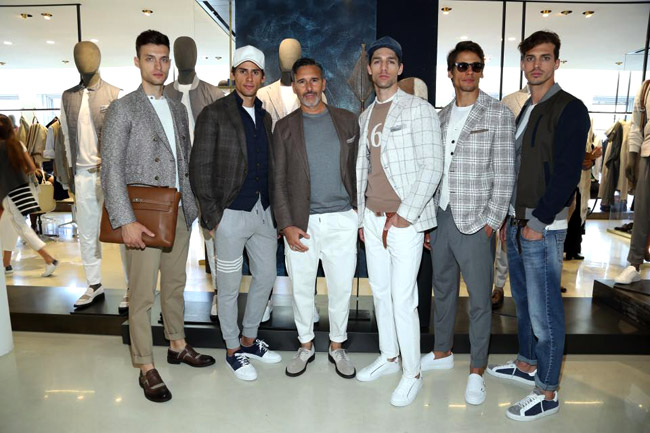 Through this juggling of genres Eleventy revolutionises the codes of the suit, proposing the relaxed suit which has jogging-style pants with pleats and an elastic waistband and also the non-coordinated smart casual suits, where formal jackets are worn with baggy pants, even in used Japanese denim, or with jogging pants in wool in plain colours or with micro chalkstripe patterns.

This generates the new concept of jacket, always unstructured but perfectly constructed. It has a detachable hood in the three-button version in traditional fabric. It turns formal in the field jacket version made up in lightweight wool. When made in stretch jersey piqué with raw seams it can be worn like a shirt. In the vertical stripe version it can be worn with the casual air of a t-shirt. When made up in textures of a material appearance it produces plays of reflections, and finally it turns blue in the new Baracuta jacket made of superfine North African nappa leather.

In the quest for comfort and lightness, the pants in precious Japanese cottons or in selvedge stretch denim become baggy, while the jeans have a soft handle in the new denim-pashmina. Sweaters and cardigans are in embossed linen/cotton or in two-tone cotton piqué. The sweatshirts get a new look in the two/three colour versions, while garment-dyed piqué polo shirts alternate with patterned versions flaunting a used appearance.

The collection is rounded off with a range of accessories, footwear and bags made in nappa-finish calfskin with a very soft hand, or in two or three colours in canvas fabric/leather. Among the novelties is the Loro Piana wool rainproof and rain system travel kit including a face cream, a hand cream, cocoa butter and the Eleventy molecular perfume.

PLATINUM
Precious, exclusive fabrics feature in Platinum, the high-bracket capsule range which supremely valorises the traditions of the craft expertise selected by Eleventy all over Italy, commissioning exclusive manual workmanship for outerwear, shirts, sweaters and accessories.

Eight stages of manual crafting go into the making of the tailored suits created by master Neapolitan tailors, proposed in precious featherweight wool/silk blends with a soft handle in the colours of the African desert. The comfy and unstructured summer jackets reveal a material surface in the patterned linens, and hopsack effects in the linen/cotton blends, while the casual models in silk/linen blend look like three-dimensional knits. They are conceived to be worn with soft pants, with newly made-over shapes and constructed with a new tailored belt. And then matched with shirts in Japanese selvedge chambray, or in linen or Egyptian cotton, or even in combinations of these.

The Platinum sweaters are woven on old Shima looms, plain, striped or with geometrical motifs in cotton, cashmere/silk blends or superfine pure cashmere. They are subjected to an exclusive treatment that gives them a dusty look that sets off the working of the stitches.

Among the new entries for the summer are super-lightweight bathers with self-shade tie silk prints in water-repellent fabric that dries in 120 seconds in the sun and in 240 in the shade.

And to round it all off, an array of accessory proposals which, in the spirit of the Platinum collection, are made by hand in line with the ancient craft techniques traditional to certain parts of Italy. Thus the scarves created by Tuscan craftspeople using antique shuttle looms are made in superfine cashmere combined with linen, silk and cotton. The hats made from Japanese hemp are created in small workshops in the Marches. For the finishing touch, a selection of ties and pocket handkerchiefs in linen, silk and cotton.

COLOURS
In the recollection of an Africa that moves the heart, the SS 2017 colour card shifts from the shades of sand and beige to the new cocoa brown, matched with tones of sky blue through to deeper blues. 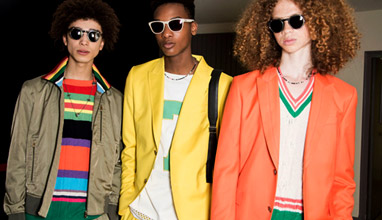