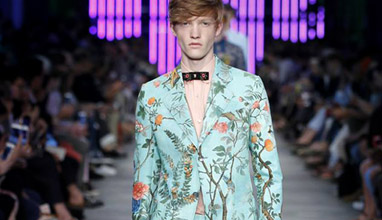 Détournement is the world that best describes Alessandro Michele Spring-Summer 2016 men's collection for Gucci fashion house. It means 'recontextualization', 'a renewal of possibility' and in fashion sense it's some sort of New Punk mixture.

Bryshere Y. Gray, a.k.a Yazz The Greatest is a 22-year-old American rapper and actor, best known for his role as Hakeem Lyon in the Fox primetime musical drama television series Empire. He is the perfect example how a man could be elegant and in the same time not boring at all by using his (stylists') imagination to interpret the formalwear's requirements.