Fashion Space Gallery, located at London College of Fashion, University of the Arts London, is delighted to announce Warpaint: Alexander McQueen and Make-Up, the first ever exhibition to explore McQueen's catwalk make-up.

Coinciding with the V&A's major retrospective Alexander McQueen: Savage Beauty, this satellite exhibition aims to unravel the process and inspirations behind the collections by examining key beauty looks developed by McQueen's most trusted make-up artists. 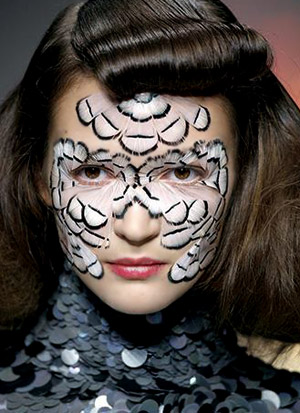 The exhibition will give insight into devices and techniques these artists used to realise McQueen's unique and highly conceptual vision.

On display will be a total of 22 looks from 13 collections which have been grouped into three central themes:
- Amplified, where facial features are obscured and exaggerated;
- Deviated, where make-up goes beyond the traditional areas and covers other parts of the body;
- Stripped, where the subtle look intensifies the meaning of the collection.

Val Garland says of working with Alexander McQueen:
'It all came from him, his point of view. It had to be absolutely specific, he knew when it was just right, when it came as near as possible to his own vision of the look. There was no right or wrong, just his vision.'

The looks on display will range from La Poupée (S/S 1997) collection up until McQueen's last collection Plato's Atlantis (S/S 2010) and are showcased on silicone masks, which have been created in collaboration with LCF BA Hair, Make-Up and Prosthetics for Performance students.

McQueen's shows were renowned for using ground-breaking technology, and in an homage to this, the exhibition will also explore make-up digitally. Make-up looks often evolved throughout the duration of McQueen shows, such as Untitled (S/S 1998) and What A Merry Go Round (A/W 2001). Working with digital creative studio Holition, a 3D installation will reimagine these moments, illustrating the transformation of runway models and highlighting the fundamental role that make-up had in creating McQueen's narrative. Additionally, visitors are also able to see themselves in select McQueen make-up looks, through Holition's specially created app, 'FACE'.

Central to the exhibition space will be a studio environment hosting an extensive programme of masterclasses, talks and demonstrations. The events schedule will be announced shortly.

First launched in 2010, Fashion Space Gallery is a contemporary space situated within London College of Fashion's Oxford Circus campus and has hosted a number of small but internationally recognised fashion-related exhibitions such as Yohji Yamamoto At Work and Jean Paul Gaultier: Be My Guest. The ethos behind the exhibitions at Fashion Space Gallery is one of excellence and innovation, supporting both established artists and cutting-edge and emerging talent. The exhibitions programme is free of charge and is supported by a programme of events, artist talks, lectures and performances.