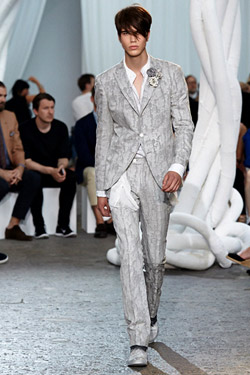 The previous week, the brand relocated for a while its tailoring service from New York to London, where you can find a variety of samples, ready to fit customer's shape and size with the help of the in-house team.

The label is even waiving all extra charges involved in its usually made-to-measure service for a limited time.

With wide variety of cuts and styles and extra customization services available and prices between £1,445 to £5,000, the John Varvatos Made-To-Measure event runs until March 1, 2015, at John Varvatos, 13 Conduit Street, London W1.

Photo:
A model presents a creation from the Spring-Summer 2015 collection by John Varvatos; johnvarvatos.com