The trends at h+h cologne 2018: Sustainable and natural, colourful and animal crazy, glamorous and glitter

h+h cologne, the leading global trade fair for creative handicraft and hobby supplies in Cologne will be offering national and international top companies and visitors from the specialised trade an ideal platform again from 23 to 25 March, where they can present and discover the new products and innovations of the textile handicraft section. The largest trade fair in the world picks up on the big trends and topics of the industry and this year is particlarly occupying itself with the international correlations that are moving the handicraft world. A trend overview.

Handicrafts and DIY themselves are on trend at the moment: The expression of individuality paired with the rejection of mass-produced goods, the move towards more sustainability and the return to limiting things down to the essentials are the expression of a counterpole to the fast-moving, digital world and are the reasons why handicrafting is becoming increasingly popular. Also a theme once again this year: Hygge and lagom. The hypes from Scandinavia express the longing for the feeling of security, inner peace and balance and thus hit the nerve of the times as the Managing Director Hedi Ehlen von Prym also confirms: "The love for handicrafting as an offset against the digital world is becoming more and more popular!". 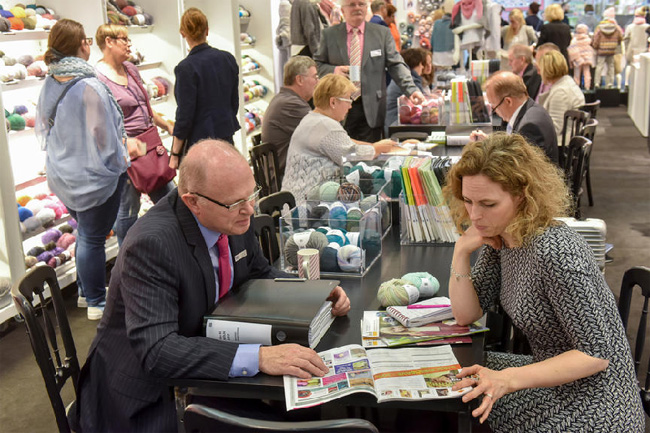 The products of the exhibitors are following suit here, namely they reflect sustainability and naturalness: Buttons made of mother of pearl, vegetable ivory, horn or liquid wood and also fabrics and yarns made of linen or hemp are en vogue this year. In the sense of the "slow food" train of thought, sustainability is also becoming increasingly more important for the theme of wool according to Lana Grossa for example: "Slow wool" addresses the question as to the origin of the product and the animals. Jersey and tweed were already hip last year and will also be trendy fabrics again this year. The DIY literature is also dominated by this: Jersey is still the strongest theme in the book section," stated Dr. Christiane Voigt from frechverlag. The visitors can also look forward to a host of accessories, sewing baskets and storage options as well as colourful tools and patchwork rulers for the young target group.

Because this target group is constantly expanding, explained Katrin Jahns from makerist.de: "Among the younger generations the interest in learning to live autark and more economically is increasing - this is evident from handicrafts such as sewing, knitting and crocheting as well as from gardening or the zero-waste movement."

In 2018 we can once again expect very feminine, girly cuts with plenty of details like frills and pleats that are inspired by retro fashion. There are however also clean and voluminous cuts with silhouettes that are based on the purism of the 90s. Materials and natural fabrics like linen are being modernised with sporty details such as jersey cuffs. 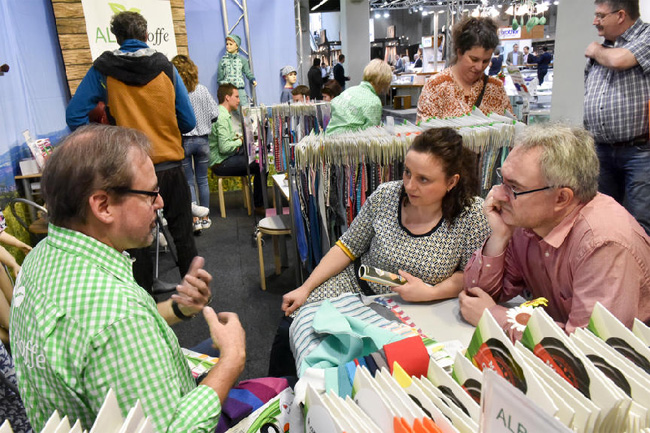 Ethno is in - from alpaca and insects through to stamping and batik techniques It is going to be "beastly" at the stands of the trade fair not only in terms of wool, but also because of the animal motifs on the buttons and fabrics. The extremely popular unicorn remains just as trendy, whereby it is increasingly being replaced by lamas, sloths and alpacas. Flowers, insects and succulent motifs make the perfect enhancement to the ethno theme world. They can be applied to the fabrics by hand. The trend consultant, Gabriela Kaiser, knows: "Creating the patterns on fabrics oneself using stamps or spraying them on is still an important trend. Batik dyeing is becoming an even bigger theme, especially in the indigo colour." The different techniques are bringing colour into play!

A diversified play of colours thanks to glitter, metallic and gradients The world of yarns is also becoming colourful, because colour gradients are totally in. In addition to the use of sequins as well as metal and glitter effects, colour gradients are absolutely in fashion and many exhibitors are adding the corresponding items to their collections - among others also ONline Garn: The trend towards colour gradiented yarn is being continually reinvented and further developed using colourfully imprinted, yet also very fine mohair yarn. The trend colour of 2018 is ultra violet, but also different gold shades such as glazed ginger, dusted colours such as green bay or pink shades dominate the palette of colours. In addition to metallic, denim also influences the more special pattern and colour designs. Vegan alternatives to leather are currently also in high demand and particularly items in metallic look are popular this year.

Handicrafts around the globe - trends from all over the world as inspiration International similarities and differences are under focus at the fair this year. The motto of the event programme of h+h cologne is "Around the world in 3 days" and it shows in many workshops how different the handicraft work of the people all over the globe is and what peculiarities can be observed within the global marketing. One example: Knitting socks that is highly popular in Germany, Austria and Switzerland is reflected by materials, techniques, needles and books dedicated to this theme. Whereby in other countries such as England for instance it is not at all popular, the textile designer, Tanja Steinbach, revealed. There are also differences in comparison to Scandinavia for instance: Here tradition rules, whereas the German market is more strongly influenced by fashion. And although quilting is really taking off in Germany, quilted buttons are definitely more popular in the USA, observed Hans Dill from Dill Buttons. 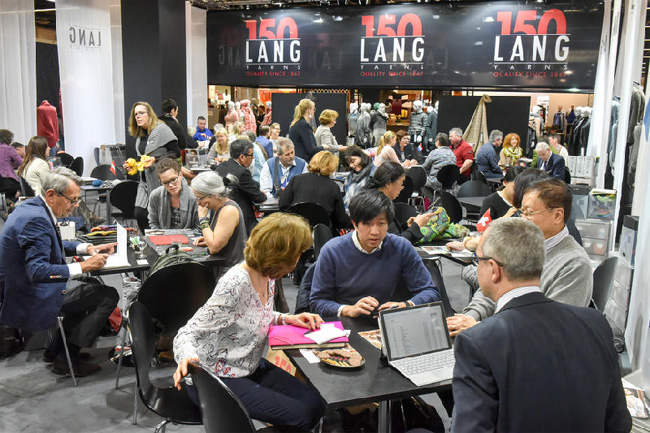 However, local trends still serve as inspiration of course: In this way the Scandinavian round yoke jumper, oriental influences such as Tunisian crocheting and matching scarves are influencing today's DIY scene. Playful trends such as pompoms and tassels are still in this year. However, the Southern European countries are overall slightly more colourful than Germany. This year Asiatic influences are having a greater impact in Europe - especially in the winter we can look forward to Indian inspired materials with lovely colours and embroideries finding their way to us. Whether inspired through international differences or the trend development for products, materials and techniques: h+h cologne has plenty of great products, colourful themes and interesting experts in store for its visitors from 23 to 25 March 2018.