MANUFACTURE ROYALE 1770 Rose gold
This timepiece, named 1770 after the year Manufacture Royale was established, captures the very essence of the brand. On the one hand, the creative verve of a bold and contemporary design, straight from the imagination of Eric Giroud. On the other, the infinite expertise that comes with the grand tradition of Swiss watchmaking, channelled into a movement that has been developed and built entirely in-house, and whose centrepiece is one of watchmaking's most compelling complications: the flying tourbillon. As though suspended in its carriage, offset at 7 o'clock, it leaves us free to admire the escapement, complete with a lever and an escape wheel in silicon, the ultimate innovative material to ensure a movement's precision and performance. Entirely decorated and finished by hand, this same movement is housed inside a pink gold case, itself enlaced by two "brancards" in what is a hallmark of Manufacture Royale. The openworked dial creates multiple levels to offer glimpses of the movement in a technical and contemporary spirit. 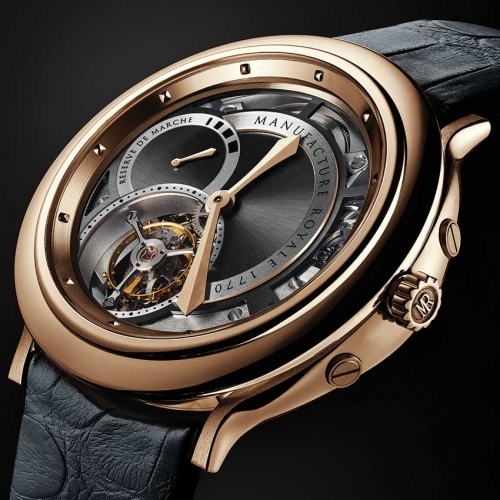 HYT Skull Green Eye
The only way to capture the essence of the Skull is to look it straight in the eye. This is the first time that, when you look at the time, time stares right back. Because Skull's eyes are alive. The right eye becomes gradually darker as the 65 hours of power reserve go by. The left eye conceals a continually rotating seconds dial. An "out of the box" watch if ever there was, Skull dispenses with minutes to fully focus on the liquid hours, the signature of an HYT watch. This fluid travels along a capillary in the form of a skull, and bending the glass into this form was a significant challenge. Also, power had to be calculated to be sufficient to push the liquid around the sharp angles while maintaining precision timekeeping over 12 hours. Nor are these the only developments. The two vertical bellows are in constant motion as their imperceptible expansion and compression drives the liquid through the capillary to make the skull even more alive. 50-piece limited series. 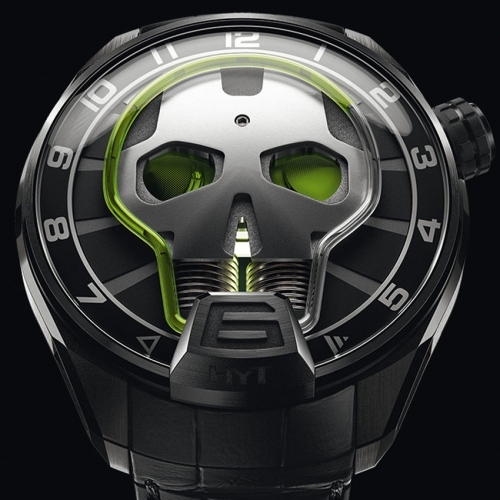 JEANRICHARD Terrascope 39 mm
Inspiration comes out of the blue for Jeanrichard, whose iconic Terrascope lends itself to two original iterations in a new 39 mm size. The first opts for the laidback, stylish colour of denim with a structured blue dial and a matching ostrich strap. The second stands out for its blue hour-markers which are suspended above a matt white dial. Diamonds embellish the bezel in steel, a metal echoed in the bracelet. In true Terrascope style, these new versions boast the legendary case which encloses a round opening in a cushion shape, all the while playing on subtle contrasts between a vertical brushed finish and a polished finish. Sporting and elegant, both these watches are devoted to a life lived for adventure, discovery and the urge to always go that little bit further. 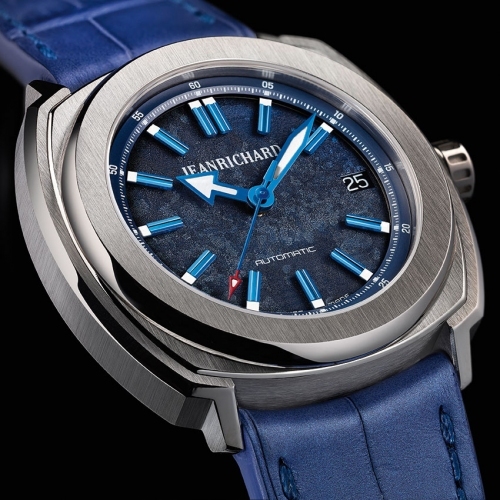 ARTYA Son of Sound Guitar Race
The independent ArtyA brand rolls out yet another amazing rock-star speed machine with its new Son of Sound Racing model, issued in a 50-piece limited edition. These collector’s watches sport classic racing track colours in shades of red, white and black conveying a hint of 1950s tarmac. Known for watches bearing no resemblance to others on the watchmaking scene, designer Yvan Arpa wanted to express a “Café Racers” world symbolising an era that saw the birth of rock’n’roll. Its adrenalin-pumping new sports an uncompromising design including active pegs to tune the date, time and play with the chronograph. All of which is set to music by a Concepto calibre specially adapted to the Son of Sound Guitar collection and naturally christened Woodstock! 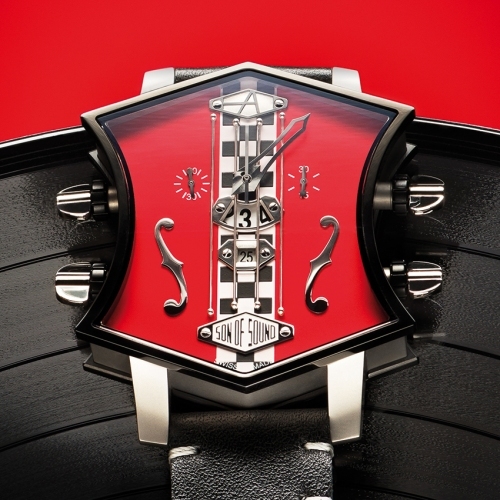 N.O.A N.O.A Evo
For N.O.A, the onward march of time is about far more than just units of measurement. It is an opportunity to draw upon the past, to live the present moment and to look to the future by evolving towards ever more daring and luminous horizons. The brand is an inspired dreamer that constantly innovates in presenting the new face of its Evolution: Evo. The watch takes the signature N.O.A three-dimensional effects to new limits by introducing a ceramic rotating bezel underscoring the architectural two-part case construction. Further enhancing these depths effects, the dial is also composed of several layers, with a lower part rimmed by a minute track and date display, while the inner bezel ring creates a multi-level impression with numerals and hour-markers that appear to be literally bursting out of the watch. At its heart beats an automatic movement that may be admired through the sapphire caseback. 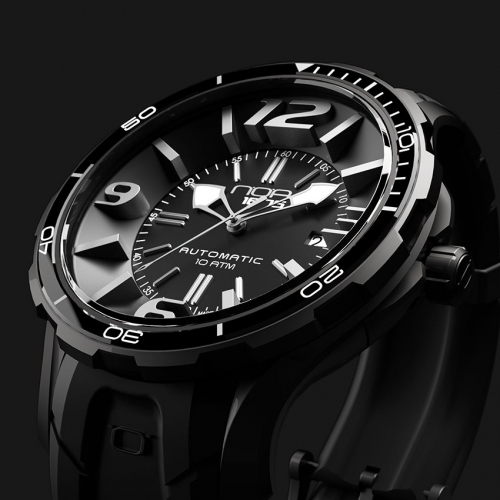 COVER Cover CoA10 Watchmaker Limited Edition
A hundred years after watchmaker Stadler-Bouché had a building erected on Weissensteinstrasse in Solothurn, Switzerland, Cover pays tribute to its headquarters with a limited-edition timepiece. Like the building itself, this new watch is imbued with a tradition of refined horology. Indeed, shortly after completion, the building was bought by one of Switzerland's world-renowned schools of watchmaking. This is where generations of prestigious watchmakers learned the skills of their trade, until 2002 when this "Uhrmacherschule" moved into larger premises. Cover bought and fully renovated the building, which in 2003 became its new headquarters. Thanks to this new vocation, watchmaking continues to thrive within these four walls. To celebrate the centennial of such a historically significant building, Cover has chosen an open-heart movement to beat inside this anniversary watch, revealing the art of Swiss watchmaking from the inside. It comes in an embellished wood presentation box, together with a watchmaker's loupe through which to observe the mechanics of the movement at close quarters. 200-piece limited series. 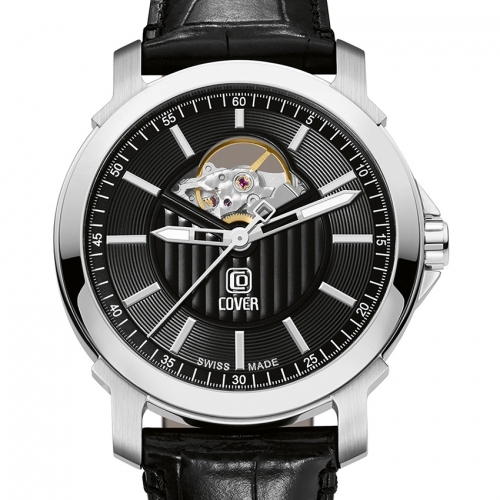 GRECO GENEVE Hexagonal Nut-design LTM-18t
In complete defiance of the adage that "form follows function", Greco Genève has transformed a truly utilitarian object, the hex nut, into a symbol of modern luxury. Fitting a mechanical movement inside a nut-shaped case, threading included, is nothing short of an exploit, yet the Hexagonal Nut watch is much more than a demonstration of expertise inherited from Swiss watchmaking tradition. The first creation in the Les Temps Modernes collection, it conveys the universal values of one of cinema's masterpieces: Modern Times. Like the film's hero, Greco Genève plays around with an icon of the industrialised world, a hex nut, and uses it to propel us into a more optimistic future, where people will be at the heart of industrial aesthetics. Full of humour and totally off-the-wall, this 50-piece limited series shows the hex nut in a new light. Mechanical allusions abound, from the wrench-shaped hands to the silicon strap that resembles the tyre tread of a powerful 4x4. 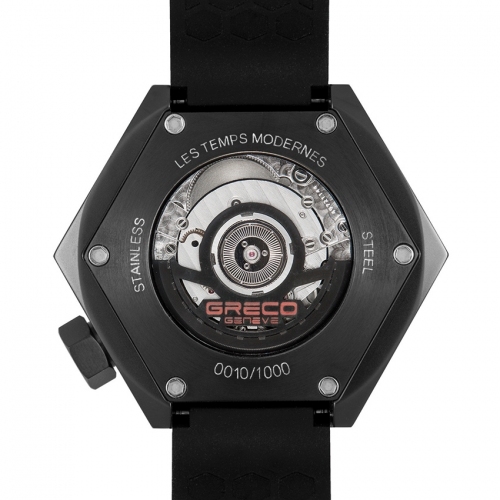 ENICAR Hyperion CH337 Chronometer
Beneath an elegantly sober exterior, the latest addition to Enicar's Prestige collection, the Hyperion CH337 Chronometer, reserves a multitude of carefully orchestrated details. Beginning with a chronometer movement that has been certified by the COSC, the foremost reference for precision and reliability. Indeed, each individual calibre must endure a battery of tests over several days, in five positions and at three temperatures. The exterior is just as seductive as the mechanics inside. A delicate pattern of waves flows from the centre of the dial, before making way for a more traditional Clous de Paris motif around the periphery, where mesmerising diamond hour-markers take their position. The case opts for a classic round shape while a bracelet with alternating polished and satin-finish links lends the finishing touch. 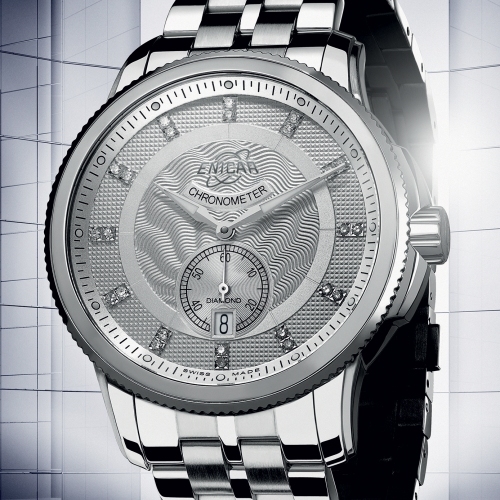