The new products from the Swiss Exhibitors at BASELWORLD 2015

BREITLING | Transocean Chronograph 1915
At a time when chronographs had just a single pushpiece in the crown, in 1915 Breitling invented the first independent pushpiece at 2 o'clock, which ensured a better separation of functions and adapted more naturally to the user's hand. To celebrate the 100th anniversary of this milestone invention that would change the face of the modern chronograph, Breitling introduces the Transocean Chronograph in a 1,915-piece limited series, equipped with a new manufacture monopusher movement featuring a double column-wheel system (patent pending), a transparent sapphire crystal back and a vintage-inspired dial. The steel case incorporates the famous 1915 pushpiece in a redesigned, elongated, smoothly integrated form that further enhances its functionality. Truly a collector's item, with official COSC chronometer certification, that will delight the chronograph's innumerable fans. 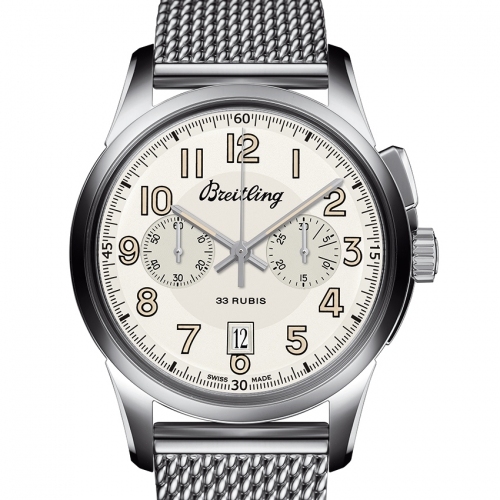 FRANC VILA Inaccessible Tourbillon Répétition Minute
This flying tourbillon combined with a minute repeater is distinguished by characteristics that are unique in their kind – starting with the choice of platinum for the case and bezel. While admittedly very prestigious, this material rarely material is rarely used in this type of watch, since its density is considered not ideal for propagating sound. Small matter. His background in chemistry together with knowledge acquired over the past years enabled Franc Vila to solve the problem by combining alloys of varying density both for making the case and the parts relating to the sound diffusion. Another original innovation is to have the minute repeater wound not by the traditional slidepiece, but instead by rotating the bezel. Each timepiece is unique. 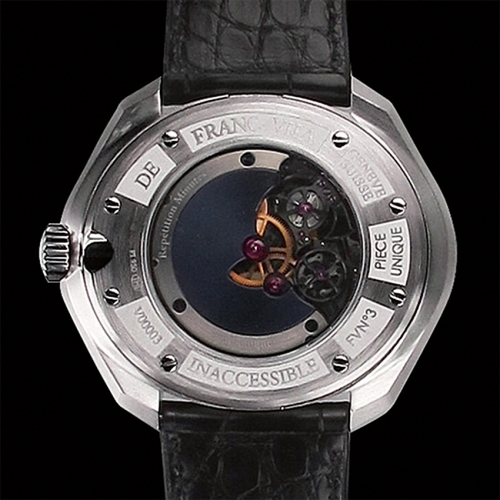 CHOPARD L.U.C Qualité Fleurier
The Fleurier Quality Foundation is one of the most demanding watch certifications. It combines the COSC, Chronofiable and Fleuritest trials. Chopard presents a new timepiece bearing the prestigious label. Entirely developed, crafted and assembled in Fleurier, the brand-new L.U.C Qualité Fleurier chronometer perfectly embodies the Chopard vision of Haute Horlogerie perfection. The brand is indeed the one that has had the most watches certified by the Fleurier Quality Foundation since the creation of the much-coveted label, which celebrated its 10th anniversary in 2014. Completely independent and open to all watch brands, not only does it certify the precision, reliability, durability and perfection of the aesthetic finishes on the movement, but also the excellence of the watch as a whole. It also testifies that the entire timepiece, including all movement and exterior components, was indeed manufactured in Switzerland. 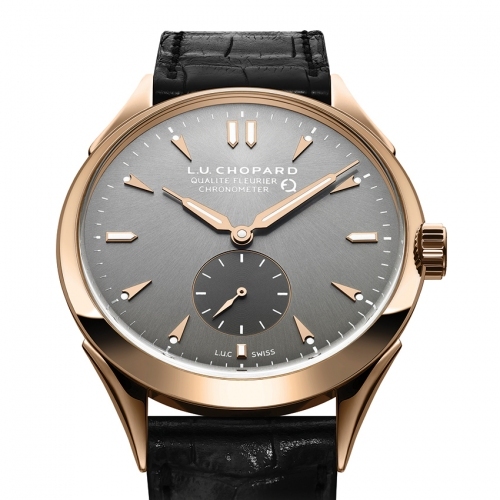 TAG HEUER Carrera Calibre 18 Chronograph
To create its new Carrera Calibre 18 Chronograph, TAG Heuer has drawn inspiration from a true icon: the first chronograph specially designed for racing drivers that Jack Heuer made in the 1960s. It’s all there: the original Panda effect with two anthracite counters standing out against a silver-toned dial; robustness together with tried and trusted functionality, and even the historical Heuer logo. Topped by spherical sapphire crystal inspired by the original model, this vintage-touch automatic chronograph is also equipped with a telemetric scale on its inner bezel ring. This function was formerly used by the military to measure their distance from artillery fire based on the speed of sound. Modern-day adventurers notably use it to see how far they are from a storm. The kind of adventurers who can perfectly identify with the Carrera collection, whose Spanish name means “top-level competition”. 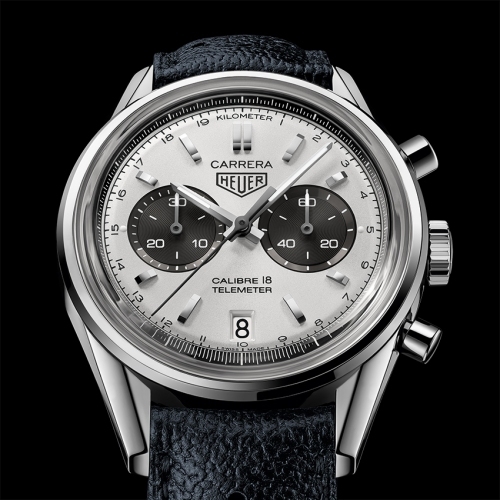 OKLETEY Merry Go Round
A new name in watchmaking, Okletey makes an impressive debut with Merry Go Round, an aesthetically pleasing flying tourbillon in a watch that uses forms, materials and nuances to great effect. The rectangular steel case with black PVD treatment encloses a silver dial, composed of a central circle with an original guilloché motif, itself surrounded by a skeletonised "spider's web" structure. The tourbillon, which takes pride of place at 6 o'clock, completes the tableau. Sharing the dial is a power-reserve indicator at 9 o'clock and, at 11 o'clock, an opening that reveals the differential. 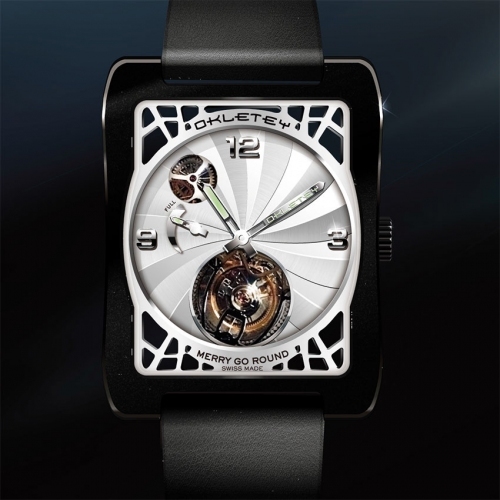 MOVADO Museum® Classic
While the history of Movado is brimming with milestone events, including more than 100 patents registered and over 200 international prizes won since its founding in 1881, the year 1947 was a momentous date in the evolution of the brand and indeed of design as a whole. Based on the principle that time measurement is first and foremost linked to the Earth’s rotation around the sun before being a mathematical division, artist Nathan George Horwitt drew an entirely numeral-free dial bearing only a 12 o’clock dot symbolising the sun at its zenith. Acclaimed for the purity of its design, this model went down in history as the Movado Museum® Watch. The brand now presents its new Museum® Classic model. While it retains the original artistic simplicity of the dial with its famous dot at 12 o’clock, this variation is enriched with subtle aesthetic details orchestrated in a remarkably understated way. The tone-on-tone details endow the black lacquered dial with a subtle sense of depth, while the lugs prolong the flowing lines of the steel case and a black calfskin strap sets the perfect finishing touch. 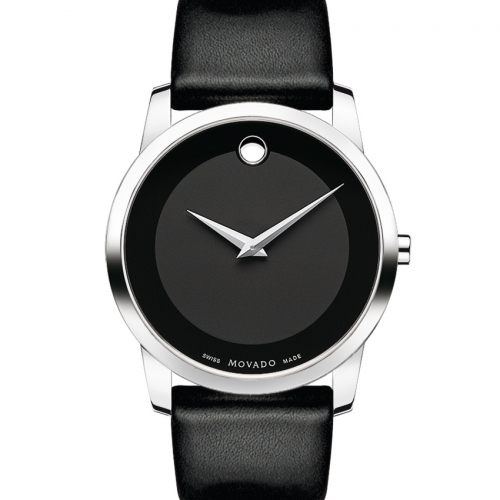 ARTYA Son of Gears Shams
Skeletonisation is a difficult art when it comes to watchmaking. Whether modern or classic, the architecture of the movement thus pared down to essentials must be aesthetically pleasing and not impede reading the time. Artya successfully ventures into this field with this collection named “Shams”, the Arabic word for the sun. It is easy to see why when examining the original cut-out of this hand-wound movement. While the shape remains the same for the three variations of this collection (each issued in a 99-piece limited edition), they appear clothed in original exteriors according to the various PVD treatments applied. The steel case/black movement is accompanied by a version with steel case and 100% gold-toned movement, along with another with a steel case and steel movement. This variety will appeal to both men and women across all generations. 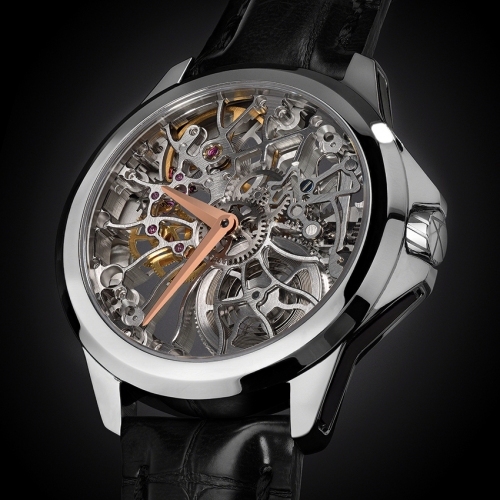 WENGER Urban Metropolitan
Wenger presents its new Urban Metropolitan line. A minimalist design ensures an air of refinement, a gunmetal-finish case lends a trendy touch and a suede-look light brown genuine leather strap gives it a metropolitan look: this watch has everything it takes to make a perfect daily companion. Featuring a perfectly legible dial with four large numerals and hour-markers standing out clearly against a black sunray brushed dial, it forcefully asserts its personality and beats to the rhythm of a Swiss Made quartz movement. 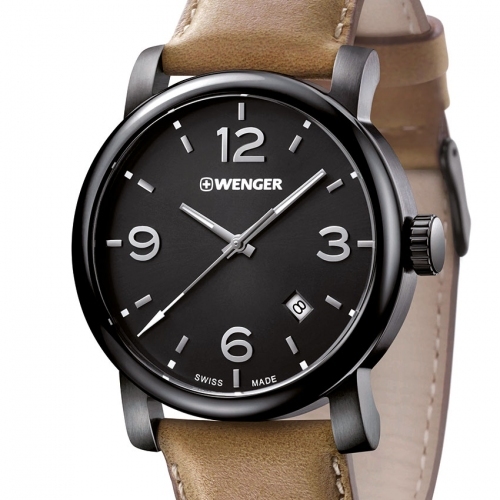 DWISS
New kid on the block Dwiss has already made a name with its inventive designs. Jet Setter Sport, the latest creation from the young brand, now introduces a new set of design codes. The patented construction of the titanium case matches complexity with innovation, with open lugs that create totally transformed perspectives. The bezel, meanwhile, integrates dynamic black rubber inserts. Furiously modern, the Jet Setter Sport makes a powerful statement, further accentuated by the black dial that makes legibility its prime concern with hour-markers in red and white. This resolutely sports-styled watch is driven by an automatic movement that tracks time with eminently Swiss precision. 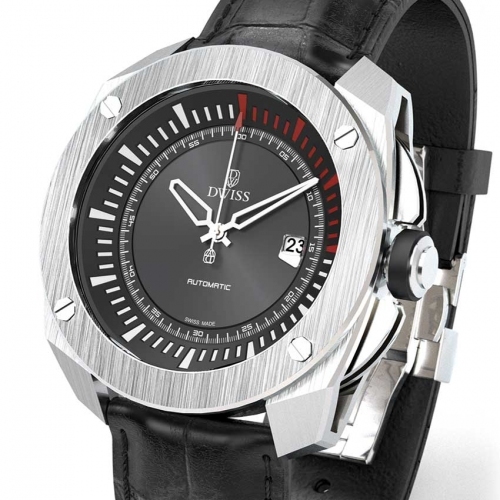