BGFN MAGAZINE >> The Men's suit business >> Fashion fairs >> Greenshowroom and Ethical Fashion Show Berlin: the most successful edition of the trade-fair duo ever

Greenshowroom and Ethical Fashion Show Berlin: the most successful edition of the trade-fair duo ever

The Greenshowroom and Ethical Fashion Show Berlin closed their doors after the most successful edition of the trade-fair duo ever. 163 international exhibitors (+30 percent) from 23 countries and lots of visitors throughout the fair underscored the on-going process of expansion in the sector whereby the new venue, the ‘Postbahnhof’ event centre, proved to be an outstanding location from 19 to 21 January 2015. As an offsite event of the Mercedes-Benz Fashion Week Berlin, the Salonshow presented curated and sharply accentuated fashion highlights from the two fairs in the crowded Club of the ‘Postbahnhof’. 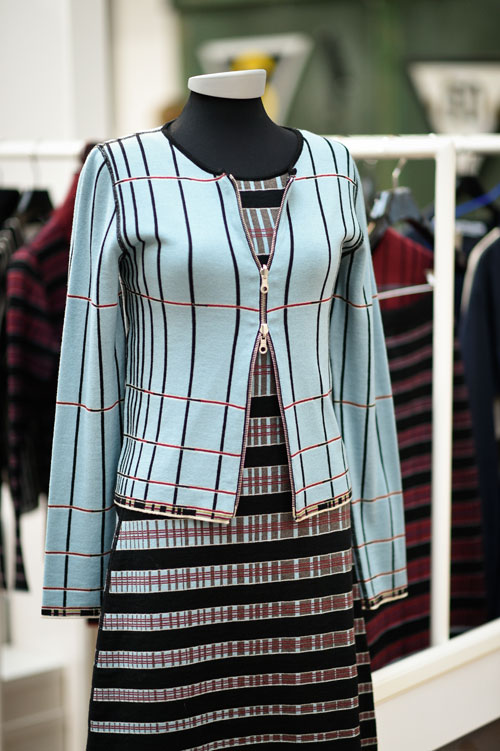 “This has been a very successful and extremely impressive occasion”, said Detlef Braun, Member of the Executive Board of Messe Frankfurt.
“Here, the fashion industry has seen the quality and high degree of attractiveness achieved by eco-fashions over recent years. Our two fairs spotlight fantastic labels and once again demonstrated their position as Europe’s centre for modern green fashions.”
The opening ceremony with Dr Gerd Müller, Federal Minister for Economic Cooperation and Development, and Detlef Braun was attended by numerous well-known figures from the worlds of politics and business, as well as important representatives of the media. Right at the beginning of the fairs, visitors were given evidence of the way in which the Textile Partnership initiated by the Ministry of Economic Cooperation is developing with the introduction of a new member of the Partnership, the Bremen Wool Exchange represented by its president, Ernst Grimmelt, which aims to contribute its expertise to the discussion on the implementation of improvements to social and environmental standards for the textile and garment industry. 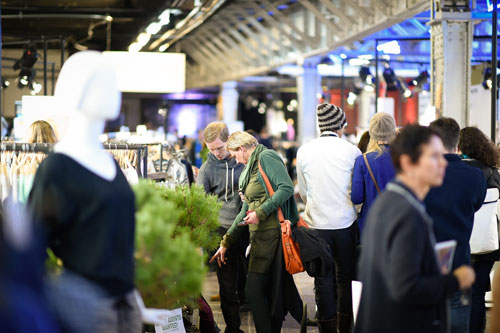 International growth of the green trade-fair duo
A clear indication for the international expansion of the green fashion sector was shown by the increasing number of countries represented at the two fairs. With 23 nations, the portfolio has become much more international. Particularly well represented in addition to Germany were the Netherlands, Scandinavia, Switzerland, Italy and Spain. There was also growth in the number of exhibitors from Great Britain. Safia Minney, CEO of People Tree, London, said, “I am delighted. Holding the two fairs together was a brilliant idea. I love the new location. The ‘Postbahnhof’ is a great venue. The atmosphere was extremely good. Now, eco, fair and sustainable fashion has a perfect platform during the Berlin Fashion Week.”
There were also non-European exhibitors from India, South Africa, Turkey and Vietnam. Sandra Schittkowski of the ‘Nine to Five’ shoe and accessory label said, “We had numerous super visitors who stayed long and entered into high-grade discussions. The mix of national and international buyers and representatives of the press, concept stores and commercial chains is perfect. The focus is on the product, which is very good for us. It has been a really good fair.”
Among the buyers at the two fairs were representatives of companies such as Adler Modemärkte, Hempel, Konk, Ludwig Görtz, Manufactum, mirapodo, Peek & Cloppenburg, Pro Idee, Unger Fashion from Hamburg, Yoox and Zalando. Together, the Ethical Fashion Show Berlin and Greenshowroom comprise Europe’s biggest platform for ecologically and fairly made fashions during the Fashion Week Berlin. 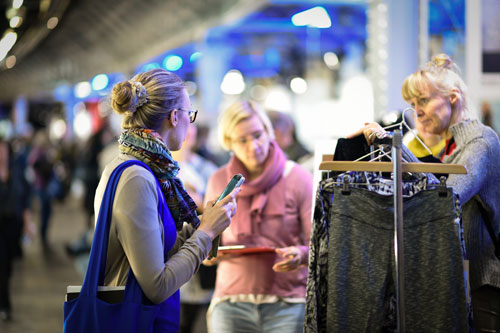 Salonshow: grand setting for green fashions
Numerous important guests from the worlds of fashion, business, politics, film and television attended the Salonshow, the highlight of the event on the second day held in the ‘Club’ of the ‘Postbahnhof’. They included Tobias Schlegl, Milka Loff Fernandes, Timothy Peach, Falk-Willy Wild, Vaile Fuchs and Renate Künast. During the fashion show, designers presented 72 looks from their new collections for the autumn / winter season, 2015/16. To be seen were outfits by Alma&Lovis, austriandesign.at, Cabo by Milka, Cocccon, Deepmello, Esmod Berlin International University of Art for Fashion, Farrah Floyd, Inti Ferreira, Jan ‘n June, Lillika Eden, Lotta, Maria Seifert Collections, Perfect Lullaby, Pira, Schreif, Sey Organic Jeans, Skrabak, Studio Elsien Gringhuis, Sveekery Berlin, WalkBoxx / SilkBoxx, Xess+Baba and Zora Heinicke. Special applause was given to actress Marion Kracht who presented her collection personally on the catwalk: Marion Kracht for Lana – vegan & organic. Milka Loff Fernandes was represented for the first time at the Salonshow by her label Cabo by Milka: “From the two fairs and the Salonshow in particular, it is obvious that sustainable, well-designed fashions are possible. I would also like to present colourful patterns and linear styles with my label. Eco-fashion is a subject that concerns us all.” 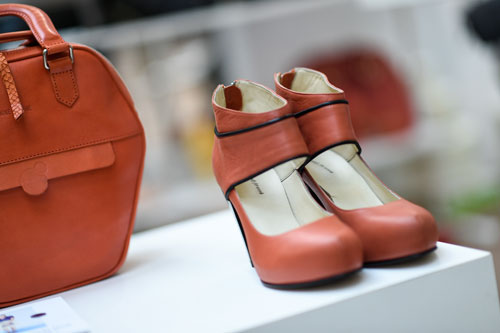 Outdoor: spotlighting ethical down
Also very popular was the Outdoor Showcase at the Ethical Fashion Show Berlin. Following its successful debut a year ago, the fair presented best-practice examples of alternative insulation with down in cooperation with the GreenroomVoice online platform, and explained leading standards under the motto ‘Don’t let me down’. The twelve innovative and renowned outdoor labels taking part included Patagonia, Vaude and Fjällräven. Additionally, the ‘Create Green Breakfast’ on the last day of the fair put the subject on the agenda with a panel discussion entitled ‘Ethical down: animal protection in the down value chain’. The panellists were Matthias Böhme (Sales Manager for Lavalan and Swisswool), Ashley Gill (Responsible Down Standard, Integrity Specialist, Textile Exchange), Mandy Lucas (Traceable Down Standard, NSF, American Health and Safety Organisation), Dr Juliane Hedderich (German Down and Feather Association (Verband der Deutschen Daunen- und Federindustrie e.V. – FDFi)) and Michael Spitzbarth (Bleed Organic Clothing). The discussion, which was organised in cooperation with ‘Create Berlin’, was chaired by Cira Riedel (journalist) and Anna Rodewald (textile engineer, both GreenroomVoice). 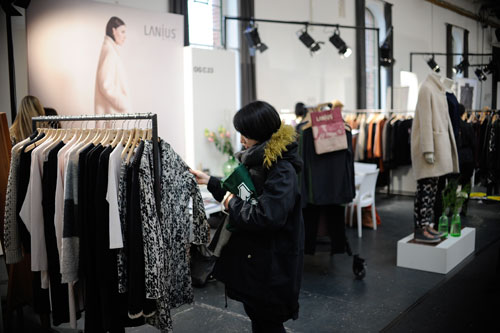 Packed events
Visitors were also invited to take part in an extensive programme of lectures within the framework of the ‘Knowledge Lounge’. Global Organic Textile Standard (GOTS), Fair Wear Foundation and Fairtrade offered insights into the latest developments within their individual remits. At a press conference, the International Association of Natural Textile Industry (iVN) published statistics on the development of the market for sustainable textiles and apparel, according to which the market for natural textiles in Germany will grow on average by five percent from 2000 to 2015. 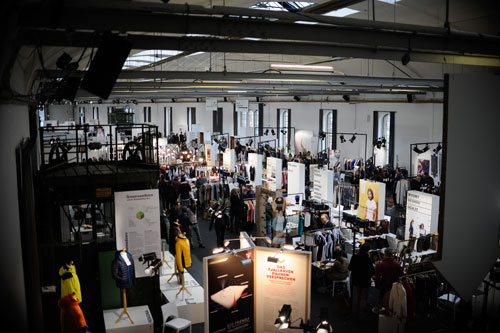 Guests of honour at the two fairs were Dr Gisela Burckhardt, who presented her new book, ‘Todschick: Edle Labels, billige Mode – unmenschlich produziert’ (Dressed to kill: luxury labels, cheap fashions – inhumanly made), during an evening reception on the second day of the fair, and actor Hannes Jaenicke, who spoke about his commitment to consumer and environmental protection in a discussion chaired by Kerstin Linnartz. At the end, Jaenicke said, “We must change consumer behaviour. People must be provided with information about the conditions prevailing in factories where conventional fashions are made. Transparency is the buzzword. The Greenshowroom and Ethical Fashion Show Berlin make a great contribution to this.” 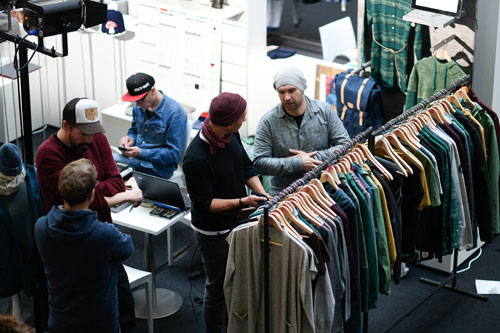 The next editions of Greenshowroom, Ethical Fashion Show Berlin and Salonshowwill be held from 7 to 9 July 2015.