Cătălin Botezatu is without a doubt the most titled and prolific Romanian fashion designer. With an activity of over 30 years, Cătălin Botezatu is very well known, both in Romania and abroad, being one of the few clothing designers who can be proud of presentations organized on all continents and in all major European capitals. His creations have brightened and amazed the world in New York and Las Vegas in the United States, in Windock in Namibia, Sun City in South Africa, as well as in countries such as Italy, France, Germany, Iceland and Indonesia. The more than 15 appearances at New York Fashion Week or the more than 20 presentations at Paris Fashion Week, which are added to dozens of other participations at Milan FW, Carribean FW, Atlanta FW, Miami FW, Bali FW, Iceland FW, represent a performance hard to match and overcome. 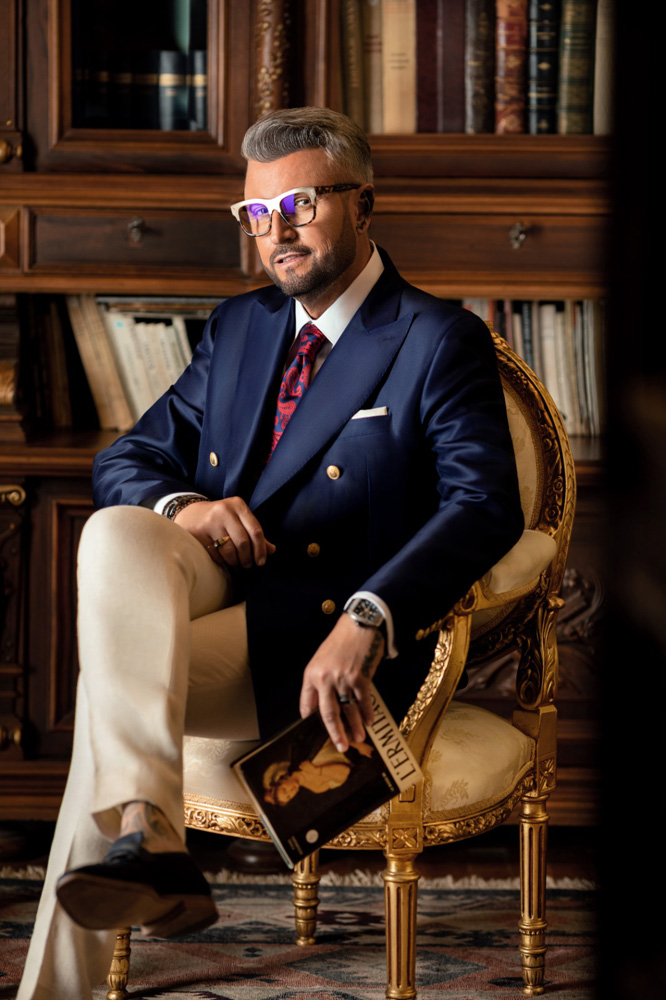 Cătălin Botezatu's collections include exclusive pieces, with a very well-contoured design, drawn in bold and unique shapes, which arouse the interest of fashion enthusiasts, whether we are talking about sports lines, men's or women's underwear, suits and pret-a-porter collections, or of the magnificent haute couture collections. 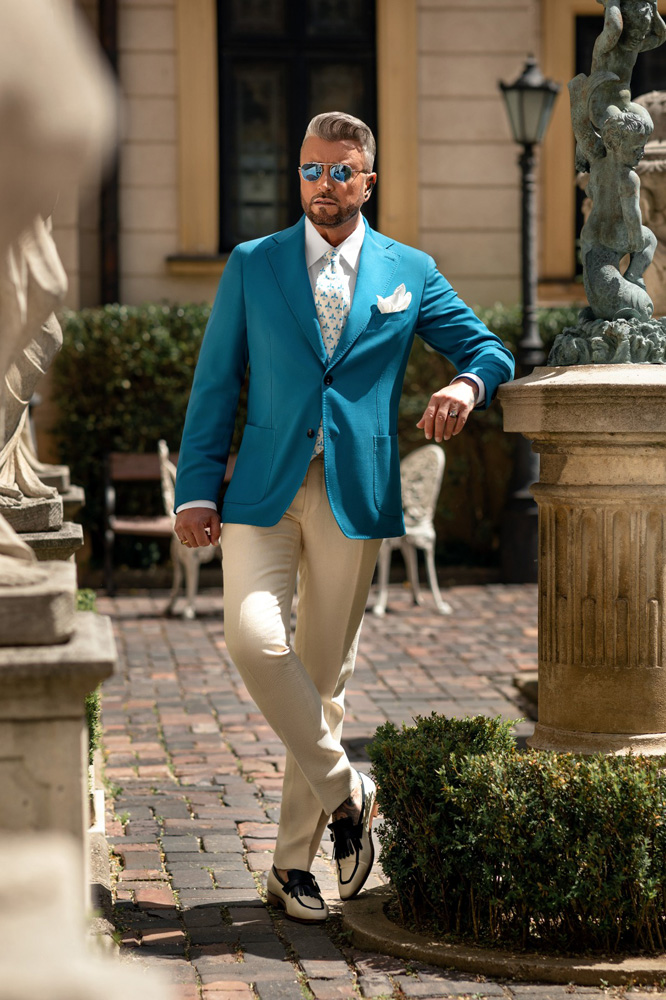 Practically recognized worldwide for his career of over three decades in the field, his work as a fashion designer has been awarded and honored with over 300 national and international awards. 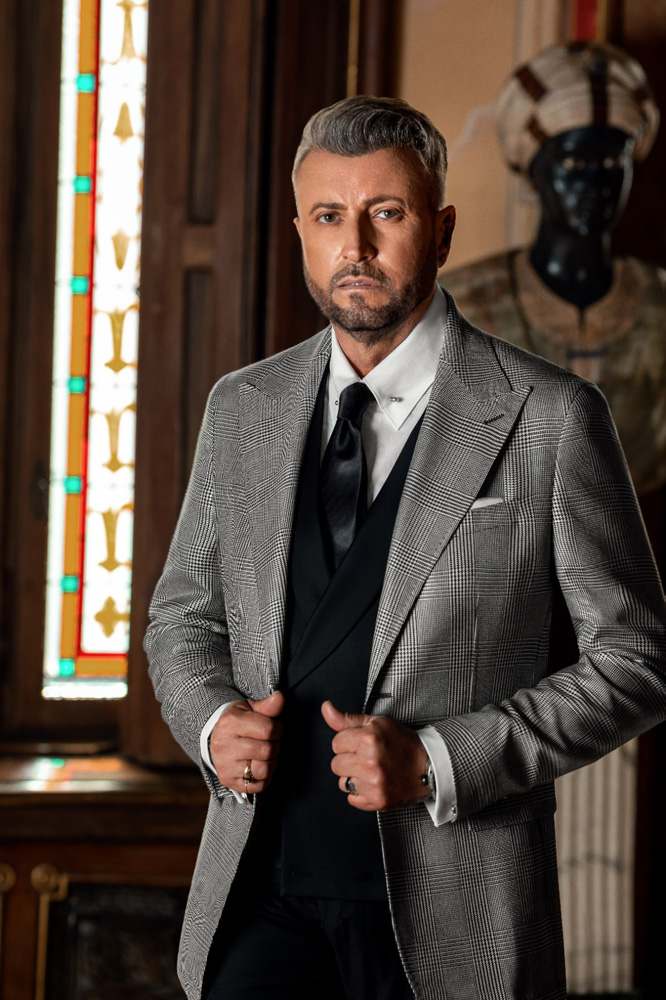 Characteristic for the fashion shows directed, supervised and presented by Cătălin Botezatu is the feeling of myth that the show itself releases, the poetic and narrative exuberance typical of stories capable of capturing the imagination of an increasingly pretentious and attentive audience. Whether it's "Egiptyon", "Budha Bar", "Angels", "Ameno", "Wiches", "Bizantium", "Barbarian", "Kyoto", "Chicago" or "JO", the show has always been complete: quality creations, direction, lots of good music, selected with taste and fantasy, and of course, color. 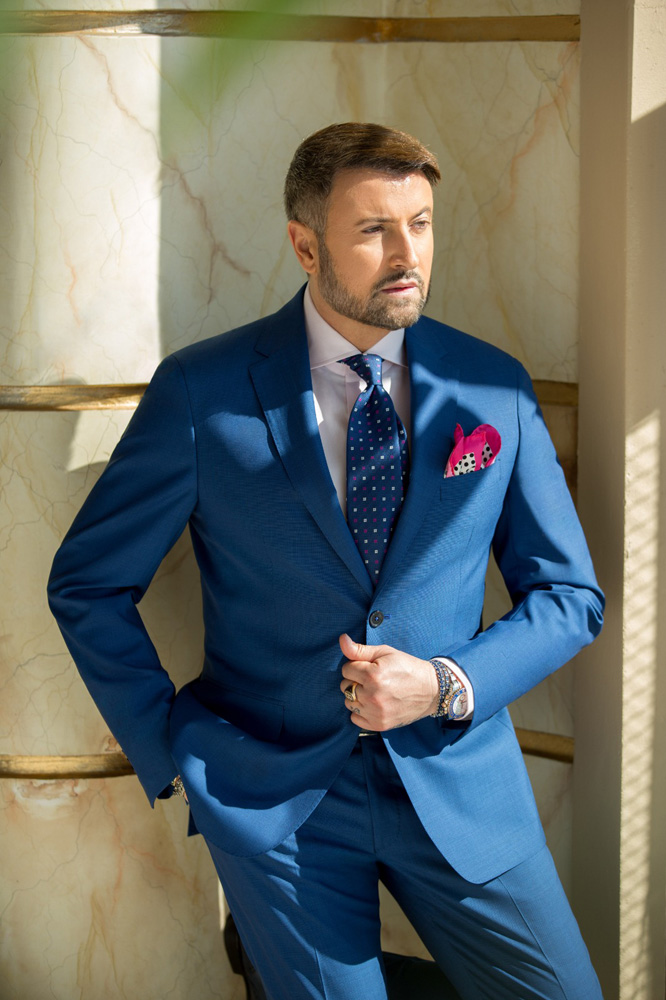 Born on December 3, 1966, in Alexandria, Cătălin Botezatu attended a fashion house in Bucharest, and in 1985 he obtained a model diploma for presentations outside the country. Only a few months later, in Frankfurt, he was awarded the title of best model of the year in Europe. He attended the European Fashion Institute in Milan, where he had Gianni Versace as his teacher, who left his mark on many of his future creations. The Italian designer chose him to work for six months in the famous "Ateliere Versace" in Milan. Returning to the country, Cătălin Botezatu set up his own fashion house, "Delphi". 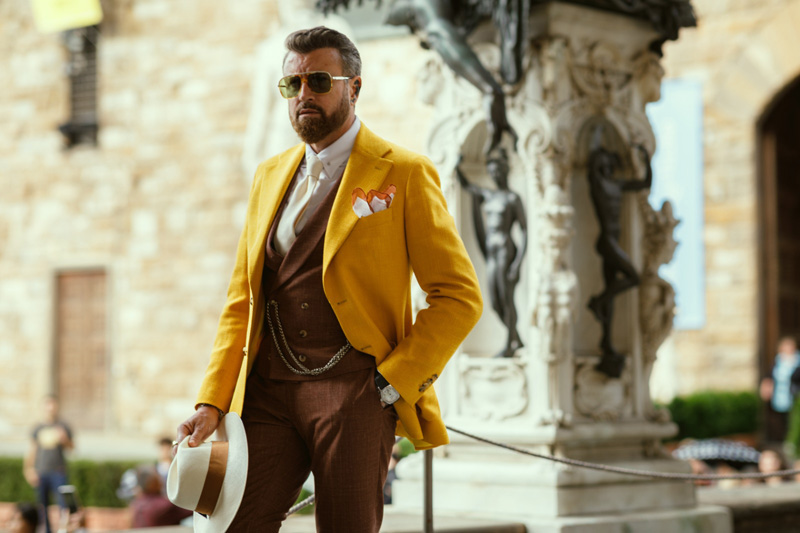 In 2000, in Egypt, he became the first fashion designer in the world to obtain permission to shoot in the perimeter of ancient sites for the "Egyption" collection, a fact considered unprecedented in the fashion world. In the same year, the pieces from "Egyption" capture the public's attention in two memorable fashion shows in Cairo and Luxor. 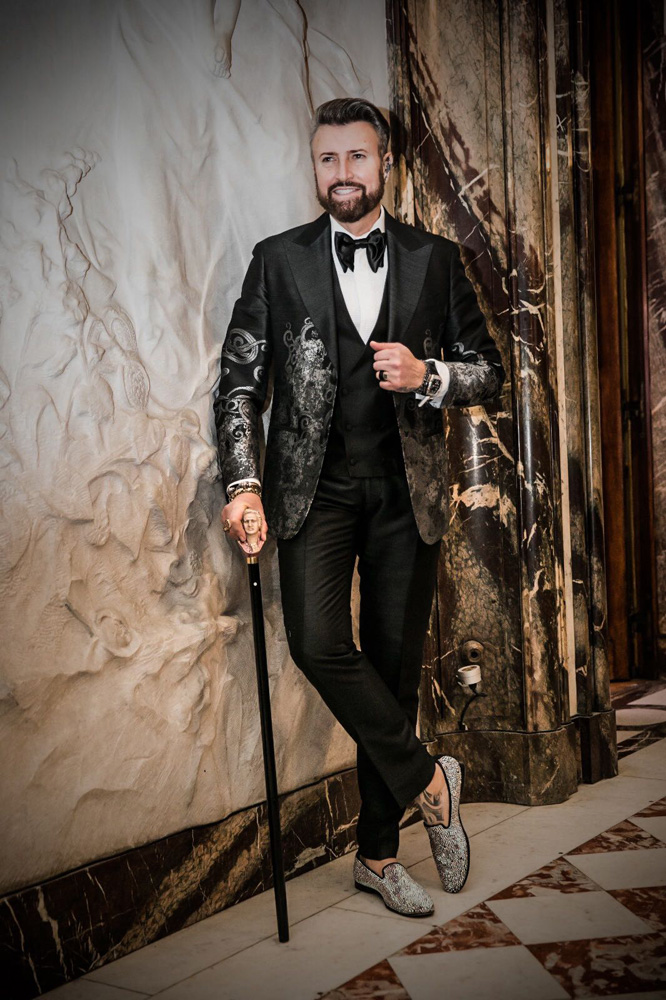 In March 2006, Cătălin Botezatu was specially invited by the Tunisian government, on the occasion of events dedicated to the 50th anniversary of independence, the Romanian creator holding an exceptional show at Orient Palace, a location recognized as extremely luxurious and selective.

In October 2007, he became the first fashion designer to make a lingerie presentation during an air race, at an altitude of 10,000 meters, on the Bucharest-Paris route.
The year 2008 marks the beginning of the collaboration between Cătălin Botezatu and Quelle, being launched the Pret-a-Porter collection by Cătălin Botezatu. 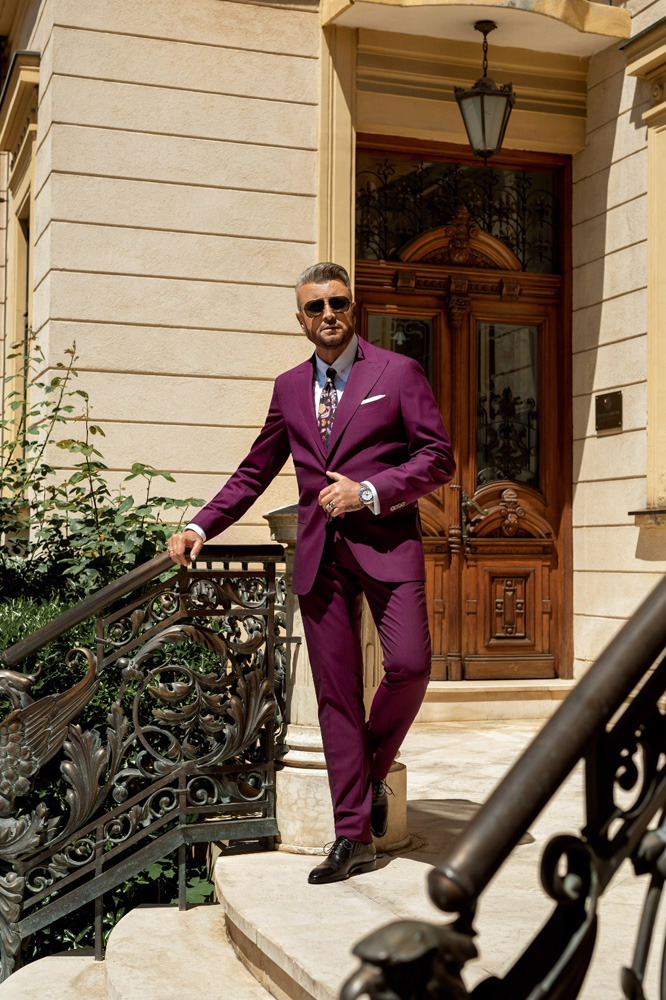 In 2009, he was present at Milan Fashion Week where he made the Haute Couture presentation of the new Valeria Marini collection "Seduzioni Diamonds", and from the autumn of 2010 he will be the exclusive designer of the fashion house Valeria Marini.

The year 2010 brings new collaborations for Cătălin Botezatu, the designer launching a fabulous collection of jewelry with Sabion, a personalized camera with his photos and name, two perfumes, the Delphi mattress, as well as the first volume of the biographical trilogy “Three Lives. Punishment".

Also in 2010 he presents the G.H. Mumm by Catalin Botezatu, during the Fashion TV Summer Festival, collections widely presented in the prestigious publication BOOK MODA - considered the Bible of International Fashion - along with famous designers such as Alexander McQueen, Balenciaga, Elie Saab, Issey Miyake and Jean Paul Gaultier. The report contains 12 catwalk photos, showing them the mannequins that parade in underwear Cătălin Botezatu, accessorized in a completely new way: glasses and champagne bottles G.H. Mumm attached to the hair ornament, the hair styling being provided by the Laurent Tourette team.

In February 2011, the first season of the famous show “Next Top Model by Cătălin Botezatu” begins on the national channel Antena 1, presented and moderated by himself. After two years, the show reaches its third season, thus becoming a real success.

In 2012, the designer participated in Haute Coiffure Paris, New York Couture Fashion Week and the Moscow Bride Fair. Three great events to which he imposed himself with his latest creations.

Cătălin Botezatu is involved in all aspects of his presentations, being famous for the spectacular shows he personally deals with - the scenography, the direction, the soundtrack and the styling. 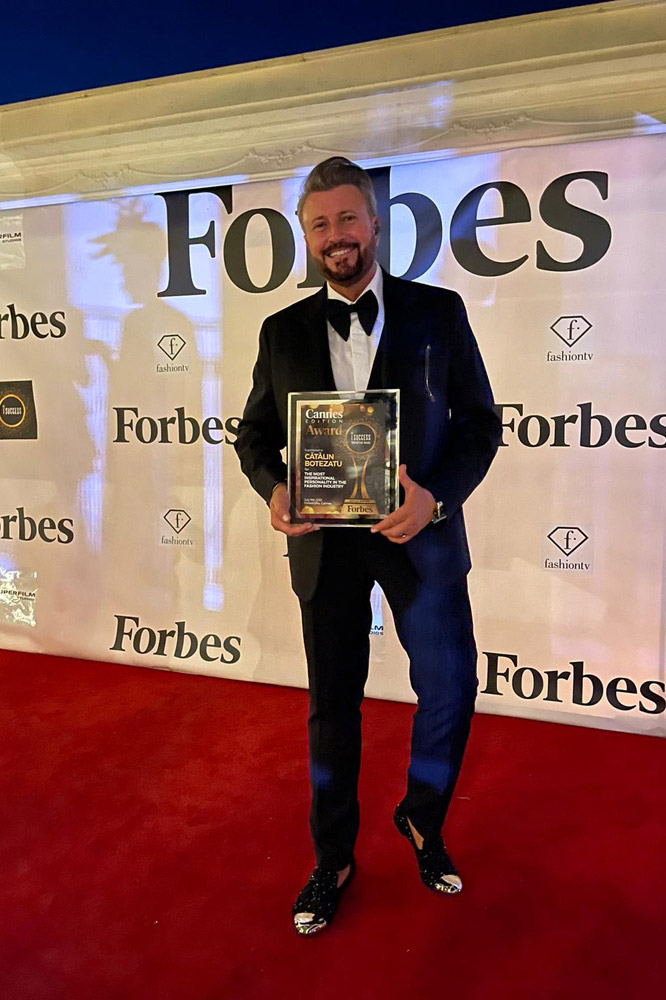 In 2013, he participates for the ninth time in New York Couture Fashion Week with the newest “Birds” collection. The designer presented a spectacular show in front of over 3000 guests at the Grand Ballroom New Yorker Hotel.

In 2014 and 2015 the Romanian designer was systematically invited to New York Couture Fashion Week, London Fashion Week, Paris Haute Couture, where he participated with spectacular collections, full of refinement and style, which confirmed his leading position on the European fashion market.

In 2016 he presents at New York Couture Fashion Week the superb collection "Spirit of India".
International fashion shows continue in 2017, 2018 and 2019 with appearances at Paris FW and New York FW where he is acclaimed for the Animal Instinct, Black Silver and Louis XV collections.

The year 2021 brings him two important awards: "The most inspirational personality in the fashion industry" at the Forbes I Success Awards gala in Cannes, where he presents the Animal Instinct collection, and Fashion TV awards him the "Designer of the year" award.