The watches of the rich and famous

If you pride yourself on your attention to detail, you don’t need us to tell you that a good watch can really complete a look. Yet with so many on the market, how can you possibly know which brand of timepiece to choose? Today, we’re looking at the best watch brands that are top choice with the rich and famous. Basically, we’ve done the research so you don’t have to…

If you’re looking for something timelessly elegant that will never let you down, set your sights on Cartier. Adorning the royal wrists of Meghan Markle (Cartier Tank Française) and Kate Middleton (Ballon Bleu De Cartier), as well as the Queen of Pop herself, Madonna (Cartier Panthere), Cartier has something to suit all tastes. And, the label is not just a hit with the ladies, Ralph Lauren himself, fashion designer, business man and philanthropist, favours Cartier, and you’ll often see him out and about sporting his Cartier Tank Cintree.

If you looking for something practical and stylish, Omega could be your best bet. Buzz Aldrin wore an Omega Speedmaster on his mission to space and trained-pilot and future King of England, Prince William wears his Omega Seamaster with pride. This is no surprise given it was a gift from his late mother, Princess Diana. Omega’s Seamaster model also boasts some serious cool points in that it is nicknamed the ‘James Bond Watch’, due to its appearances in Golden Eye, The World is Not Enough, Tomorrow Never Dies and Die Another Day. If you need any more convincing, Omega was also top choice with Elvis Presley, who wore the Omega Constellation – the only watch by the brand to feature a diamond bezel sold by Tiffany & Co. You could always trust The King to go glam! 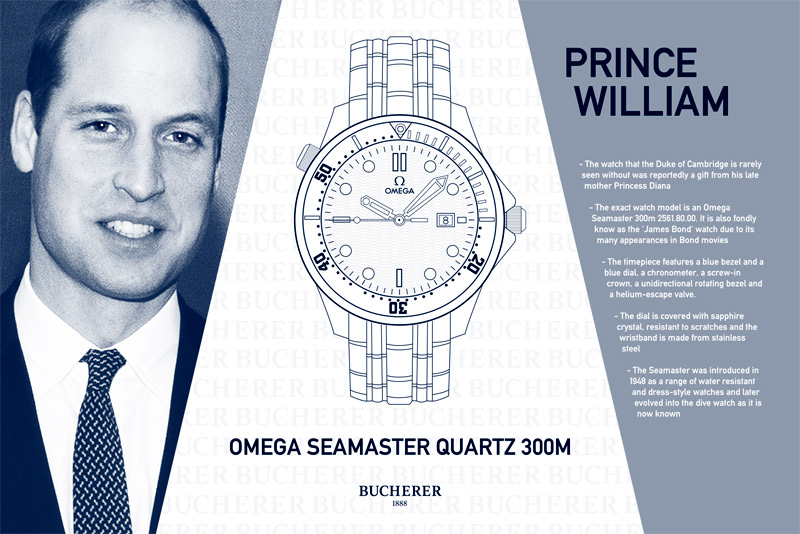 If you want to emulate one of the highest paid men in Hollywood, look to the wrist of Matt Damon. Damon became attached to the TAG Heuer Link Chronograph after wearing it on the set of The Bourne Identity. When he asked if he could keep it, Damon was informed it was no longer in production. TAG promised Damon that if he played Jason Bourne again, they would gift him the discontinued watch – and, as reliable as their watches, TAG Heuer stayed true to their word. Furthermore, Steve McQueen ‘King of Cool’ himself was a TAG Fan, sporting a TAG Heure Monaco – the world’s very first square Chronograph. 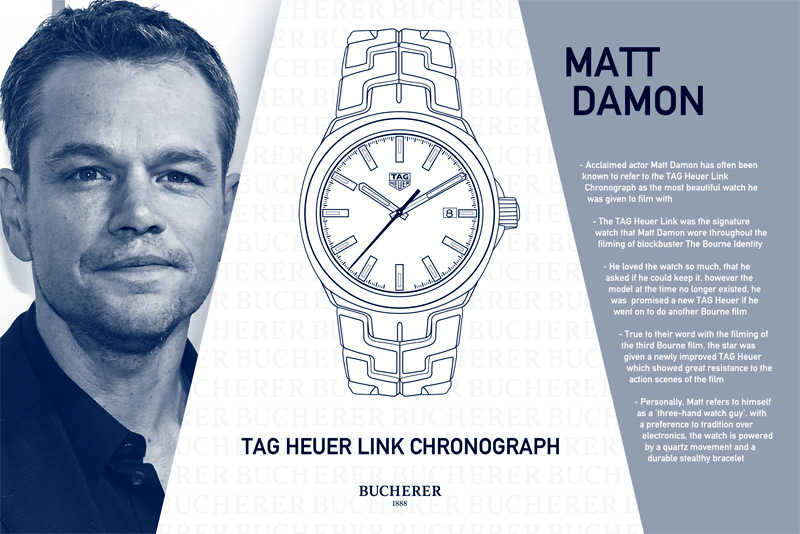 To view the full range of watches mentioned in this article, go to Bucherer.com.